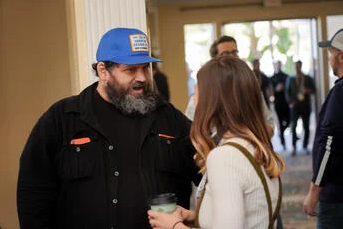 Before THREADX kicked off this past February in San Diego, many of us arrived a day earlier, eager for what the days ahead would bring. Aside from the welcome reception and dinner scheduled for later that day, a select few of us were able to attend a personalized bonus workshop featuring the one and only Aaron Draplin. After a brief conversation with our event emcee and fan favorite riCardo crespo, he introduced Aaron, telling us we would love this guy and that he was about to drop some serious “knowledge bombs” on us. Needless to say, riCardo nailed it.

Aaron James Draplin is a graphic designer, author and founder of Draplin Design Co. Born in Detroit, he's now based in Portland. His clients include Nike, Burton, Esquire, Ford and the Obama Administration (and blah blah blah ... we read this in the brochure). However, to have him tell us the same info speaks volumes about his personality. And I quote: 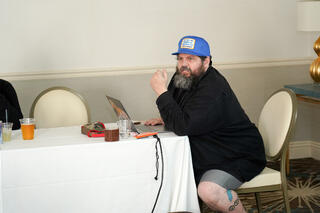 “Bred from the loins of the proud Midwest, this little [guy — this isn't really what he said, but you can get the picture] was squeezed out in Detroit, in the year 1973 to the proud parents of Jim and Lauren Draplin. Growing up on a steady stream of Legos, Star Wars, family trips, little sisters, summer fun, fall foliage, drawing and snowboarding. At 19 I moved west to Oregon to hit jumps."

After attending a prestigious art and design school because he thought he needed to, Aaron worked for a snowboarding magazine and an agency. He created Draplin Design Co. in 2004. He travels the world telling his story, calling his engagements speaking fiascos. Sharing stories of this travel he mentioned loving people from Nebraska. (Lucky for me, that is where I am from.) He co-created "Field Notes" with his brother, and I dig its iconic style and general purpose as it fits nicely in the pocket of my cargo shorts. He published his first book, "Pretty Much Everything," in 2016. 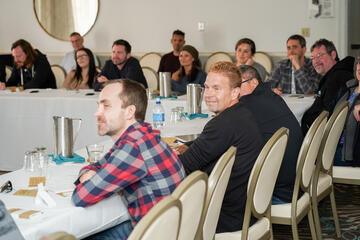 He prides himself on a high level of craftsmanship and quality. Early in his career, he won an art direction award. He is quite proud to report that he's managed to "keep everything out of the red."

With what Aaron has accomplished, you might think he would have a sense of arrogance. He and his personality are bigger than life, but not his ego. With a wealth of examples and a down-to-earth personal touch, Aaron provided valuable and informative insight. This workshop was filled with stories of his influential work and his unlikely career path. His straight talk and sincere delivery guided us through different examples. Specifics on topics such as file structure, design symmetry and others were noted. He shared intimate details about his childhood and family that wove through his career as a designer. 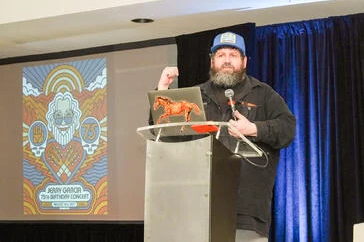 Through this workshop, his presentation and the social activities he took part in, Aaron gave us a chance to look behind the scenes into his life. From washing dishes to affording his first computer to dealing with big-name clients, he was refreshing and real. He described his own style as “clean, clear and concise.” “But my style doesn’t matter,” he noted. “Be true, be clever, but back it up.”

In one example, he shared a collage of logos in which one client paid $25,000. For another? A burrito. He says it is important to keep room in your life for pro bono work. In his mind, it is a privilege to work with people and interact — to be part of their story. My impressions? He rolls up his sleeves, he’s constantly working and does the work. We can certainly all learn from his example, conviction and direction.

Read more about a few of the design tips learned at THREADX.