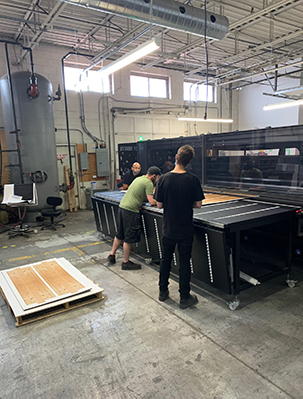 For Cameron Advertising Displays (Camad), based in Toronto, Canada, growth isn’t just a business goal — it’s a necessity. “You always plan for growth; the day you sit there and say ‘Well, I’m fine,’ you might as well just pack it in,” says President Dan Deveau.

And part of Camad’s growth has meant being the first North American business to install the Agfa Jeti Tauro H3300 UHS LED — an investment it made in the challenging time of the pandemic.

The company started in 1960 as a traditional screen-printing operation owned and led by Deveau’s father, who is still involved with Camad today. Though it dipped its toes in the digital world in the early 2000s, the company’s acquisition of Schawk Cactus Imaging in 2010 catapulted it to the screen and digital operation it is today. Its vast array of large-format and 3D applications includes point-of-purchase packaging displays, custom wallpaper, set designs for televisions and movies, and trade show booths.

“It’s probably a shorter list of what we don’t do,” says Director of New Business Development Justin Drew. “We don’t turn a lot down, and people come to us for those weird and quirky things, too.”


Camad’s model has always been to offer a wide range of volumes and find a way to get their work out the door. “Some of [our] machines might look overwhelming, but they do the ‘onesies’ and ‘twosies’ and they will do the thousands and tens of thousands,” says Account Executive Matt Cone. “Because we operate from 7 a.m. to 11 p.m., it gives us — and for me as a sales rep — the ability for quick turnaround times that other companies can’t offer. We do have two shifts, and we’ll work on the weekend [and] around the clock if we need to.” 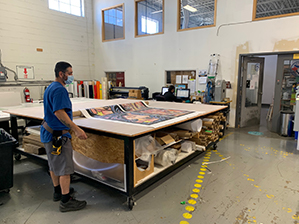 This collective work ethic results from Camad’s culture, which is as much of an investment as the operation’s equipment.

“It continues to be a family business, and that pours out into the facility and all the team here as well,” says Drew. “Everyone’s happy to be here. We’re all for the team; we’re all Cameron people, which reflects in our end results and what goes out the door and the pride that we take.”

“We're very particular about the type of people we want to work here,” adds Deveau. “First and foremost, when you’re working here, your prerequisite is you have to be a good person. I’ve got to see a fit, and I've got to be able to get along with these people, as well as my staff — everybody that works from the top right down to the very bottom of the rung. There's a respect level throughout that started with my father; it's a cohesive unit that I don’t ever want to change.”

As a result, Camad has seen strong employee retention and staff who have had children following in their footsteps. “You don’t often get people leaving on their own volition,” says Cone. “It's circumstance or they’re lifers.”

This employee support has been especially evident during the COVID-19 pandemic, especially with the Toronto area identified as a hotspot.

“I'm proudest of the fact — and I sleep at night [knowing] — that none of my guys had to be laid off, and none of them missed a paycheck. If they had to go get tested, or if they were in a hot zone, or had to ride public transit, I just paid them to stay home and my father wholeheartedly agreed,” says Deveau, noting that Camad has not taken any government grants or loans throughout the pandemic.

Like other printing operations, Camad’s business was impacted due to the cancellation of events. “A lot of the work I did was for the Toronto Blue Jays and [other] sports teams, for parades, concerts, and events. That all got kiboshed and I thought I would go to zero,” says Cone. “But, it did transition; I probably printed 200,000 COVID signs.”

Deemed essential, the shop took necessary safety precautions while stepping in to produce 3D masks and COVID signage for hospitals, grocery stores, restaurants, and other businesses. “Some of it we got paid for, some of it we didn’t. It didn’t really matter at that point. It's a world pandemic — what are you going to do?” says Deveau.


Despite struggles and Camad’s business ultimately being down 15% in 2020, Deveau says the team continued to see the glass as half full, investing in the Jeti Tauro H3300 UHS LED in 2020 as part of its preparations for when the world would come out of the pandemic. "In times of economic downturn over the last 30 years, we’ve always been in ‘a position of strength’ because we're very prudent in how we run our business, and we buy when we can afford," he says. 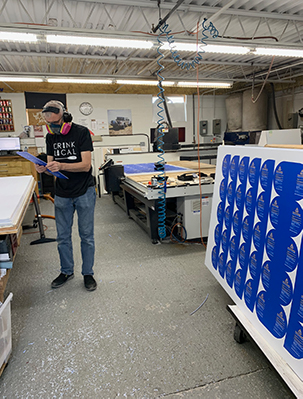 While purchasing from Canadian-based Agfa enabled Camad to continue purchasing all of its consumables in Canadian dollars, the shop also has the security in knowing tech support is just minutes away. However, the biggest advantage of the shop acquiring this faster press is now being able to “double up” with two Agfa machines that align with Camad’s typical volumes of work.

“We're shifting some of our more tired machinery to the newer stuff,” adds Drew, noting the transition of some of its existing lower-volume screen work to digital. “I think at the end of the day, five to ten years from now, there might not be a screen press [here].”

Transitioning equipment, however, is just one part of Camad’s growth strategy, as the company has also brought on an outside agency to manage its marketing and online presence. “Before, we had a fairly static website and no presence in any of the social media platforms, and we've worked over the last six or eight months to increase our presence, and it’s been working,” says Drew.

For Camad, these investment and marketing efforts amid a pandemic show both staff and customers that the company is in it for the long haul.

"We thought this would be a good time to get into social media just to prove our relevance and that we’re still here and these are the projects we’re still working on,” says Cone.

"We’re showing strength; we’re showing growth and development,” adds Drew. “You don’t have to worry about us not being here tomorrow. We're proving to you that we’re a liable company and we're strong and we're moving forward, so move forward with us.”

And, according to Deveau, following a “good” first 2021 quarter, Camad is moving forward, with business almost off the charts, a momentum he plans to keep going while evolving the shop.

“We've positioned ourselves, in how we've done things over the years, that we're ready to go and we’re ready to grow,” says Deveau. “I would never sit there and say we’re going to stay static. I still have plans in my life to buy another press in ‘22. That's just the way I'm built, and the way these guys are wired. It's what we do.”

Lauren Searson has been the Managing Editor for the PRINTING United Journal since November 2017 and has worked in publications/communications for 13 years.