On July 20-22, Empire Screen Printing, with the support of PRINTING United Alliance, will celebrate more than a decade of the Partners in Printing Expo event. This year’s iteration, taking place at the La Crosse Convention Center in La Crosse, Wis., will feature a vendor fair, plant tours, and networking events, including a concert and charity golf outing.

Originally organized in 2010 as a sales meeting for Empire Screen Printing’s representatives throughout the U.S. and Mexico to come together and tour the plant, the Partners in Printing Expo has grown to a major event in the printing industry held every two years. As it has grown, it has shifted to include education about and for the entire printing industry, including plant tours that are open to all printers, whatever their segments and markets.

This is part of the Expo’s mission to strengthen the printing industry as a whole, so that all involved can benefit. From the industrial to commercial segments, it is important everyone works together to adapt to changing technology, improve sustainability, and learn from one another to keep the entire industry strong and relevant.

Therefore, the vendor fair will include businesses and suppliers spanning different industry segments, and will be focused on evolving technologies, sustainability, and strengthening small businesses through partnerships. In addition to the support of PRINTING United Alliance, the Great Lakes Graphic Association, Printing Industry Midwest, and the National Association of Graphic and Product Identification Manufacturers will be represented.

With education, networking, and innovation, Partners in Printing represents an opportunity for moving forward as an industry, after what has been a difficult past year for many businesses. For Empire Screen Printing, this is especially important as printing has a major impact on the local community, employing thousands of printing professionals in direct or indirect roles in the La Crosse area. 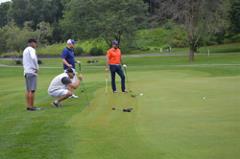 It’s also an opportunity to have a great time in a beautiful Wisconsin location. The Tattoos and Tailgates Concert Series will feature rock, pop, and country acts. The event is hosted by Chris Kirkpatrick from N’SYNC and includes The Nashville Cartel, Trailer Choir, Hinder, and Tyler Farr. The celebrity charitable Partners in Printing/3M Cup this year will benefit the La Crosse Children’s Museum. The concert and celebrity charity golf are ticketed events that are open to the public.

Register today for the 2021 Partners in Printing Expo.

Douglas Billings has served in the role of the VP of Sales & Marketing for Empire since 2003 and has called Wisconsin home for most of his life. Doug has a background in retail management, grocery and hard-lines distribution, and sales/marketing. He currently is an instructor of Marketing and Supervisory Management at Western Technical College and has served on numerous local and national boards. His goal is to strengthen and create partnerships within the print industry for future generations.