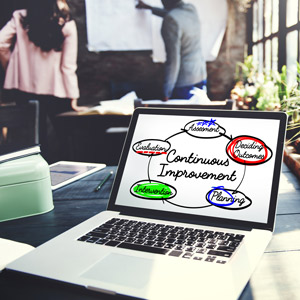 Last week, PRINTING United Alliance’s CI Ready! virtual event presented the foundational principles of continuous improvement (CI), along with tips for its implementation and real-world examples in a series of daily one-hour sessions. Whether you are new to CI, or looking to onboard your employees in its integration in your business, here are a few takeaways from this informative event.

Kicking off the week was a look at the basic principles, tools, and methods of lean manufacturing and CI in “The Bedrock Principles and Tools of Continuous Improvement,” presented by John Compton, owner and principal of Compton & Associates.

Compton began with a look at the fundamental elements of an organization, which he defined as a group of people working within systems and processes to accomplish some purpose. Each of these elements is equally important to an organization's success, he noted.

And while the type of organization (e.g., a printer or nonprofit service) dictates the type of services and goods, the overall purpose remains the same: maximizing the value flowing to the customer while minimizing waste everywhere in the company.

Compton’s first bedrock principle is that the customer defines value. It is the customer’s needs and expectations for a specific product or service, including functionality, appearance, timeline for delivery, and total cost, that defines an organization’s value. And while it’s easy for companies to replace customers’ opinions of value with their own, Compton said it takes hard work and listening to truly define value. “If our goal is to improve our processes by minimizing waste, we must be clear about what’s defined as value from the customer’s perspective,” he added.

Another CI bedrock principle he touched on is that waste is everywhere. “Waste is any activity that consumes resources but produces no added value to the product or service the customer receives,” said Compton, noting examples of rework, storing items between work sets, and searching for missing materials.

Compton then delved into the eight specific types of wastes, best remembered by using the acronym TIMWOODS (transportation, inventory, motion, waiting, over-processing, overproduction, defectives, and (unused) skills). When it comes to waiting, Compton said, “Typically as much as 90% of a product’s life in traditional batch and queue shops, like most printing companies, will be spent waiting to be processed.” He also noted how overproduction is viewed as the worst of the wastes due to its impact in causing many of the others.

In addition to these foundational principles, Compton discussed improvement methods, the first and widely practiced being 5S (sort, set in order, shine, standardize, and sustain). Attendees received a first-hand look at this method the following day in “Implementing 5S and Creating a Visual Workspace: A Case Study,” with Dan Rudnicki, continuous improvement manager, Royal Containers.

With three conversion plants, two corrugators, and shared ownership in a paper mill, Royal Containers’ CI journey, Rudnicki shared, was spurred by President and CEO Kim Nelson. She recognized that in order to grow sales from $68 to $100 million by 2023, the company needed to change from doing business as usual. “Currently in 2021, we are heading toward our $80 million track and are heading in the right direction for the $100 million by 2023,” he added.

In 2018, Royal Containers partnered with Quadrant5, a leader in CI and lean implementation in the corrugated and packaging industry. 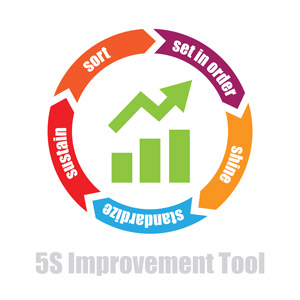 Before the implementation, Rudnicki said, “We thought we were plant-tour ready, but we had a lot of work to do. The whole industry suffers from the same issues; changes were the only way we could be different, therefore ahead of the competition.”

Among its 5S improvements was building a CI Workshop with solutions for team members, including two workstations with storage racks, utilizing wheels for easy movement, and using decals on the floors versus paint to aid the correct placement of structures after cleaning.

While using a 5S audit tool to help team members improve and stay on track, Royal Containers is also the fifth company globally in the packaging sector to have an Obeya Room, a series of tools and techniques to help management solve the more difficult problems. As part of this initiative, the company has a master schedule to track major milestones, and an observation circle, through which a designated team observes the production floor for one to two hours to note instances of waste. These are then marked by category on a TIMWOOD chart, and rated on their level of impact and effort via a pick chart.

In addition to productivity and safety benefits, Rudnicki said a 5S implementation benefit has been tours of the facilities, even noting compliments from AICC that it had the best plant and tour.

Another benefit Rudnicki noted was employee buy-in, and the integral role of employees in CI was further emphasized in “Capturing Workforce Knowledge and Creativity,” led by Dr. Alan G. Robinson, an author and authority on corporate innovation and improvement.

“For the last 250 years, the rate at which we've been able to improve productivity in the United States has not changed,” began Robinson. Most companies, he noted, improve between 1 and 2.5% per year, but in the last 10 years, it’s actually been under 1% for the average U.S. company. But to look at it positively, Robinson said, this is an opportunity.

When it comes to CI, there are four ecosystems he said a company has to handle: innovative ideas, high-level problems and opportunities that top management addresses, mid-level issues relating to processes and systems, and smaller problems and opportunities seen predominantly at the frontline level. “Most of any organization’s improvement and innovation potential lies in bottom-up ideas from frontline staff,” said Robinson, noting this improvement can be between 70% and 80%, based on varying studies.

Citing the 80/20 Principle of Improvement, Robinson said for leaders and managers who want to get from point a to point b, whether that’s increasing sales, improving productivity, etc., 80% of the ideas you need are in, or potentially in, the heads of your frontline people. In other words, 80% of the underlying improvements come from employees, while, at most, 20% comes from management, consultants, new technology, or other sources.

Using an example from his work with Clarion Hotel–Stockholm, Robinson shared how the bartenders were the biggest idea activators. One comment regarding installing locks in the bar cabinets versus transporting alcohol up and down the stairs each day ultimately saved a bartender 766 hours per year. “Things like this look small, but actually they’re quite large,” said Robinson. “Most problems are buried deeply in your company’s processes and work practices.”

For companies to capture this knowledge, leadership needs to understand that frontline ideas are the main driver of a company’s performance and ability to innovate, Robinson said. It’s important management understands what is involved, and its critical role. It also means teaching employees new skills and raising the quality of their thinking in their day-to-day operations, incorporating this creativity and drive for improvement and organizational function as part of everyone’s job.

Lauren Searson has been the Managing Editor for the PRINTING United Journal since November 2017 and has worked in publications for 13 years.