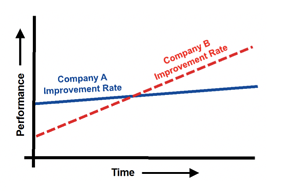 The concept of continuous improvement (CI) is well known in our industry and practiced to some extent by most companies.However, the key is not whether your operation is improving, but the rate of improvement being achieved. Two companies can both be improving, but the one with the greater rate of improvement will eventually overtake the one with the slower rate. The gap in performance between the two companies will become substantial over time and directly affect competitiveness.

The challenge is to find a way of accelerating your rate of improvement to capture the advantages in quality, time, and costs. One method is a concept called 2 Second Lean, a term coined by Paul Akers in a book by the same title. Akers devised the concept after struggling to apply lean manufacturing concepts to his small manufacturing company. His “fix what bugs you” mantra helps simplify lean in a way that is easier for small-to-medium sized companies to grasp. Morning meetings teach and reinforce lean thinking. Daily improvement time is set aside so employees can refine their processes, reducing motion and other forms of waste. Improvements are videotaped and celebrated. Slowly an improvement culture takes hold in which employees start viewing improving process time and quality as their primary responsibility. 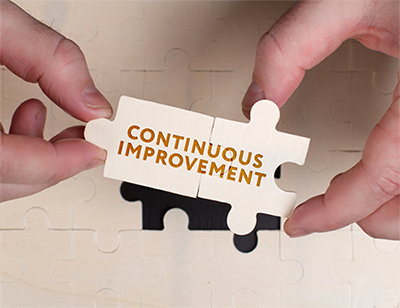 That companies can completely commit to and succeed with a 2 Second Lean approach is hard for some leaders to fathom. They assume employees will resist, momentum will soon drain away, and giving up manufacturing time can’t be justified by a greater number of improvements. “Prove it to me,” they say.

Next Wednesday, June 17, during PRINTING United Alliance's (PrUA) CI Ready! Virtual Conference Event, Ryan Tierney, the head of design and innovation for Seating Matters, will do just that. He’ll describe how his 70-person company transformed itself into a world-class lean manufacturer in less than four years by following the principles of 2 Second Lean. The Northern Ireland-based company had grappled with excess inventory, slow production, and vendor issues and only began to truly thrive after practicing lean thinking. Tierney will talk about the company’s approach, including its daily meeting, 3S program, and improvement system. That a relatively small company lacking many resources can completely change its culture and performance should inspire every PrUA member.

The weeklong CI Ready! event (June 15-19, 2-3 p.m. ET daily) will also reveal how one printing company has reduced spoilage to a ridiculously low level and how another has used various visual tools to improve processes and sustain performance gains. There will be plenty of valuable content for companies intent on increasing their pace of improvement, although Tierney's account of Seating Matters' of its lean implementation will likely be the most eye opening.

Visit printing.org/ci-ready to learn more and sign up to listen to the company's remarkable story — just be thankful you’re not competing against them!